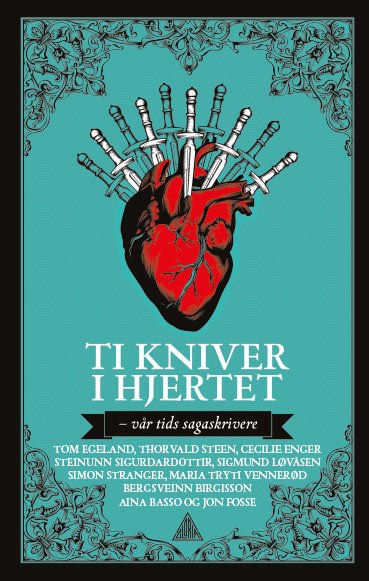 10 Knives in the Heart

10 knives in the Heart

Ten of Norway’s sharpest contemporary pens were invited to write knife-sharp short stories based on a scene, character or event from the old sagas. Whether it focuses on Njal, his wife Bergthora or his son Skarphedin, each story must deal with a topic or event that is central to our times. It is difficult to overstate how significant the sagas are for the Scandinavian identity and for the region’s subsequent literature. This is a collection of sharp reflections on our times, which shed light on both long political lines and short, specific everyday issues.

Each author, in their own way, have examined what makes a good story nowadays, inspired by what a good story was a thousand years ago.

In her story, entitled Crime is crime, Steinnun Sigurdadottir focused on Hallgerd from Njal’s saga, now named Gerður Halla and wandering the streets of modern-day Reykjavik. In Portrayal, Jon Fosse writes about a dream, a subject of great significance in the sagas. Cecilie Enger takes Aun from the Ynglinga saga as the starting point for her story. “Whatever I might be inclined to write must in that case start out with the women in the sagas,” answered Aina Basso, opting for Thorgils from the Floamanna saga for her short story, In it alone. Odin’s eight-legged horse Sleipnir is the subject of Thorvald Steen’s story, while Maria Tryti Vennerød drew inspiration from the story of Erik Bloodaxe in Dad’s kingdom. In Simon Stranger’s The saga of Gisli, we meet Gisli himself, and Bergsveinn Birgisson has written The saga of Geirmund Heljarskinn. In Tom Egeland’s text we meet Snorre’s slayer, while Egil’s saga is the inspiration for Sigmund Løvåsen’s Must have flowers for the graves.

10 knives in the Heart