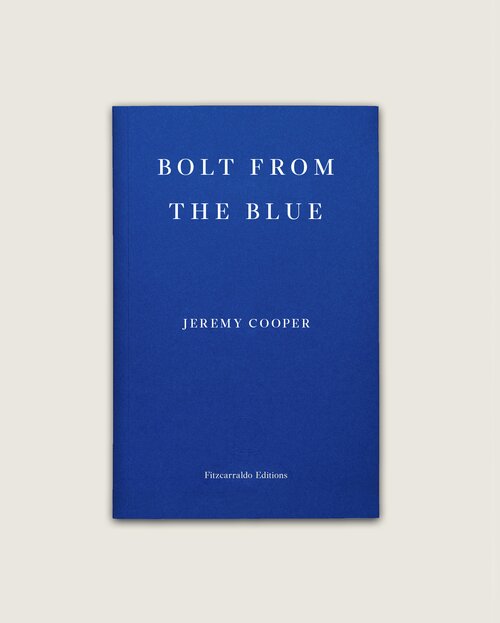 Bolt from the Blue

In Bolt from the Blue, Jeremy Cooper, the winner of the 2018 Fitzcarraldo Editions Novel Prize, charts the relationship between a mother and daughter over the course of thirty-odd years. In October 1985, Lynn moves down to London to enrol at Saint Martin’s School of Art, leaving her mother behind in a suburb of Birmingham. Their relationship is complicated, and their primary form of contact is through the letters, postcards and emails they send each other periodically, while Lynn slowly makes her mark on the London art scene.

A novel in epistolary form, Bolt from the Blue captures the waxing and waning of the mother-daughter relationship over time, achieving a rare depth of feeling with a deceptively simple literary form.

Winje Agency represents the author and Fitzcarraldo Editions in the Nordic countries.

Jeremy Cooper’s work is consistently haunting and layered, built on a refreshing trust in the reader to delve deeper behind the quiet insinuations of his prose. His work resists every modern accelerant, creating a patient and precise tonic. He is easily one of the most thoughtful British fiction writers working today.

Adam Scovell, author of How Pale the Winter Has Made Us

Bolt from the Blue is a scintillating, wistful exploration of a good career and a poor relationship. Pithy yet expansive, it’s an essential, engrossing, illuminating read for any aspiring artist.

There’s a strange magic to Jeremy Cooper’s writing. The way he puts words together creates an incantatory effect. Reading him is to be spellbound, then. I have no idea how he does it, only that I am seduced.

Ben Myers, author of The Offing

Jeremy Cooper is a writer and art historian, author of five previous novels and several works of non-fiction, including the standard work on nineteenth century furniture, studies of young British artists in the 1990s, and, in 2019, the British Museum’s catalogue of artists’ postcards. Early on he appeared in the first twenty-four of BBC’s Antiques Roadshow and, in 2018, won the first Fitzcarraldo Editions Novel Prize for Ash before Oak.